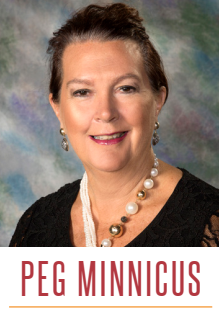 Peg Minnicus is passionate about learning and teaching. She used this passion
to make a lasting impact at Carroll White REMC and the state as a whole.

Minnicus retired from Carroll White REMC on Jan. 8 after a 33-year
career. Throughout her years of service, she worked in a variety
of positions, mostly with member services. But her legacy is much
more than the titles she’s had and the positions she’s filled.

“Peg is the founding mother of Touchstone Energy Camp,” said
Casey Crabb, Carroll White REMC communications and public relations
manager. The camp is a statewide program that has impacted thousands
of Hoosier kids.

“I brought the idea for a youth camp back from Nebraska,” Minnicus said. “I met an electric cooperative employee who developed a camp in Nebraska
for high school students. I received her newsletter, and I thought that we had the perfect venue to start a camp right in our own backyard …at Camp
Tecumseh.”

An Indiana REMC Touchstone Energy Camp team was formed and planning meetings began. “It took two years of planning,” Minnicus said. “We went to camps all around the state. We decided that this camp would focus on younger students to inspire them before they might consider Youth Tour, which is geared for high school students.”

Sixth grade students going into seventh grade from across Indiana gather in Brookston, Indiana, each year to learn about energy while making new friends and enjoying camp activities and games.

Along with other REMC employees from around the state, Minnicus is part of the fun and excitement each year at Touchstone Energy Camp. “The camp kept growing and growing,” she said, estimating that through the years, approximately 2,200 have participated in the program. Unfortunately, though, the camp was canceled in 2020 and 2021 due to COVID-19.

“Peg’s legacy will always be highlighted by being the driving force and founder of the Touchstone Energy Camp for youth all over Indiana,” said 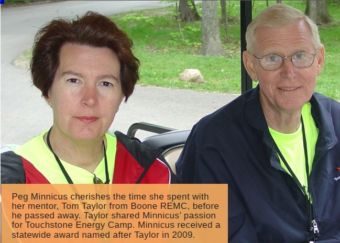 “Receiving the 2009 Tom Taylor Award meant so much to Peg,” continued Price. “Tom was a very close friend and mentor to Peg. To be recognized on the state-level with this award was very appropriate.”

In addition to state recognition, Minnicus received national recognition with a Spotlight on Excellence award in 2014.

“It is so much fun to educate, inspire and offer encouragement to students,” Minnicus said. In addition to her commitment to the Touchstone Energy Camp for over 15 years, she also worked with the 4-H Electric program.

A graduate of Delphi Community High School, she married Jerry Minnicus in 1984. Though neither of them were raised in a farming family, that didn’t stop them from starting a family farm.

“Both our children live a mile away from us … in different directions,” Minnicus said. Mark and his wife,Rachel, have two children, Bailey, age 3, and 1-year-old Warren. Morgan and her husband, Jared Anderson, have 9-month-old Emersyn and daughter Mackenzie. Mark and Morgan are both part of the farming operation.

Minnicus’ niece, Ephina, husband Josh and daughter Mercedes also live within a mile of her. “We are so fortunate to have our family close,” Minnicus said.

In addition to her full-time REMC job, Minnicus has always been part of the family farm. “I help Morgan with the bookwork and correspondence,” she said. “I’m the organizer. I clean a lot of fence rows, help combine in the fall. Everyone loves it or they wouldn’t be involved.”

Minnicus hopes to travel when the pandemic allows. She plans to meet with some of her REMC friends from throughout Indiana in Siesta Keys.

Currently, Minnicus continues to serve on the Carroll County 4-H board and the Junior Achievement board. She is most excited about being named the president of the Camp Tecumseh
board of directors.